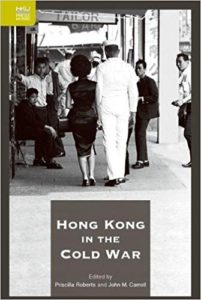 As a British colony straddling the line between the two Cold War camps, Hong Kong put the British government in a difficult position. In practical terms, the colony was indefensible. Thus, Britain needed to deter China from invading, often by claiming that it had American military and nuclear support. However, when it came to the United States, London’s fear was not that Washington would not take Hong Kong seriously, but rather that they would take it too seriously. Britain was concerned that Washington would use a British commitment to defend Hong Kong as an excuse to base American troops and equipment in the city. This would have obliged America (and Britain) to defend the territory, closing off the option of a managed British retreat. Throughout the 1950s, the American government constantly tried to get a straight answer from London, only to receive, in the words of Professor Tracy Steele, “much soul-searching, plus head-scratching as to what precisely the Americans wanted to hear.”

This is an excerpt from a book review of Hong Kong in the Cold War published in the Asian Review of Books on January 24th, 2017. The review can be found here.

← Small farmer, big field [The Straits Times]
“ASEAN has succeeded against all odds”: an interview with Professor Kishore Mahbubani →