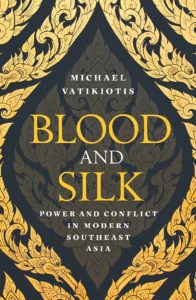 Predictions for the future of Southeast Asia on the whole follow two different narratives. On the one hand, ASEAN is celebrating its 40th anniversary, and forty years of interstate peace along with it. The region’s economy is growing at breakneck speed, led by countries like Vietnam and the Philippines. Yet, on the other hand, news reports are filled with stories about scandal and crisis, from Malaysia’s continuing 1MDB scandal, Rodrigo Duterte’s extrajudicial drug war, or the ethnic strife in Myanmar’s Rakhine State.

In his newest book Blood and Silk: Power and Conflict in Modern Southeast Asia, Michael Vatikiotis, former managing editor of the Far Eastern Economic Review and currently Asia Director for a conflict resolution NGO, gives a personal and accessible examination of the region’s politics. Vatikiotis has spent several decades reporting on and from the region, and can therefore compare countries today to what they were decades prior, teasing out the connections between then and now.

Blood and Silk is a counterpoint to more positive views of the region, such as Kishore Mahbubani’s The ASEAN Miracle, which point to Southeast Asia’s record of economic development, interstate peace and (compared to other developing regions) stable governance. In contrast, Vatikiotis looks inside Southeast Asian countries to find continued corruption and oppression, growing internal violence, and rising intolerance, to focus on

the Indonesian farmer who falls pretty to creditors and climate change; the Cambodian teenager enslaved on a Thai fishing boat; the Muslim Rohingya migrant from Myanmar starving and beaten, then left for dead in a ditch by human traffickers along the Thai-Myanmar border.

This is an excerpt from a book review of Blood and Silk: Power and Conflict in Modern Southeast Asia published in the Asian Review of Books on October 20th, 2017. The review can be found here.

← Easternization: “A game-changer for not just the world economy, but also for international politics”
The Ganges and India’s Future: an interview with Victor Mallet →