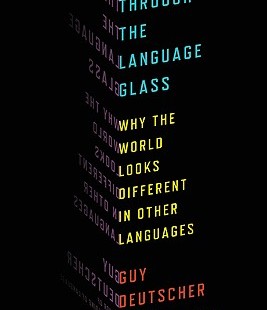 Through the Language Glass: Why the World Looks Different in Other Languages by Guy Deutscher [Book Review]

At first, the idea that language affects the way we think seems plausible, if not obvious. Given that we often perceive people of different cultures to be thinking differently, and language is often coterminous with culture, one might be forgiven for assuming that language was the cause of the divergence. These ideas crystallized in the early twentieth century with the Sapir-Whorf hypothesis, which claimed that Native Americans whose languages lacked a clear reference to time were unable to conceive of time as a linear concept. Such ideas have seized the attention of those in many fields: for example, philosophers such as Mill or Nietzsche who used the etymology of words to justify their social theories. The belief in the power of language to radically affect human thought continues in popular consciousness.

However, it is clear that the idea, in its pure form, is ridiculous. Does Mandarin’s lack of explicit tenses mean that Chinese speakers lack any concept of past, present and future? Do those who speak languages with a subjunctive inherently have a subtler understanding of truth and falsehood? Does English’s lack of a formal second-person pronoun mean Americans are less respectful of authority than, say, French or Russians? Sapir-Whorf quickly fell into disrepute among linguists and, since then, linguistics has on the whole taken the position that the surface forms of language – vocabulary, syntax and the specific details of grammar – are independent of and unrelated to thought.

This is an excerpt from a review of Through the Language Glass: Why the World Looks Different in Other Languages by Guy Deutscher, originally published in the Asian Review of Books on March 13th, 2011. The full review can be accessed here.

← Monsoon: The Indian Ocean and the Future of American Power by Robert Kaplan [Book Review]
Mission to China by Mary Laven [Book Review] →